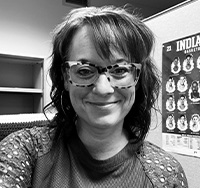 Rebecca Brahaum is the Special Projects Coordinator for the 21st Century Scholars Program at IU Bloomington, where she also received her undergraduate degree. She is originally from Indianapolis but has called Bloomington home for almost a decade.  Prior to her position with the 21st Century Scholars Program, Rebecca has had various professional roles in television, communications, and voice-over.  She also has a passion for serving and has advocated for abused and neglected children as a Court Appointed Special Advocate for Monroe County CASA.